All products ship from our California warehouse!

Three lasers in one light! TRIO shines red, blue, and green laser pinpoints (all three colors, combos of two colors, or just one color at a time—your choice!) on any surface. Included remote control allows you to cycle through special effects like twinkle and fade, or adjust the projection brightness.

Built-in auto timer powers on for 6 hours and off for 18. Weatherproof metal housing and 20 foot cord make the TRIO the ultimate year-round landscape light as well as an excellent choice for holiday displays and event lighting!

This model is certified refurbished by our skilled BlissLights team. It has been thoroughly quality tested and is covered by our one-year warranty.

See our list of international shopping options by country here!

Help is on the way. If you need assistance setting up your light, contact our customer support center by phone or email.

Effects for every occasion 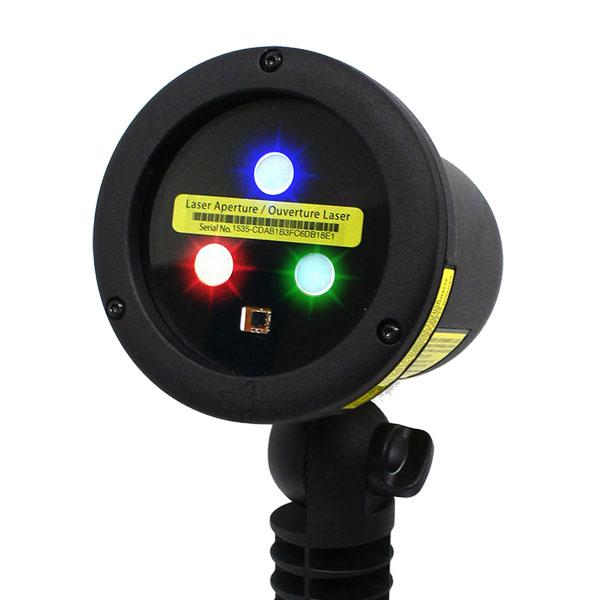 Light up your home with vibrant multi-color stars

Transform your space with twinkling stars in red, blue, and green!

High-quality laser components shine brilliant stars in your garden, on your home, or around the pool. Shine all three colors at once, or a combination of 1 or 2 with included remote control. Rugged metal construction stands up to rain, sleet, and snow. 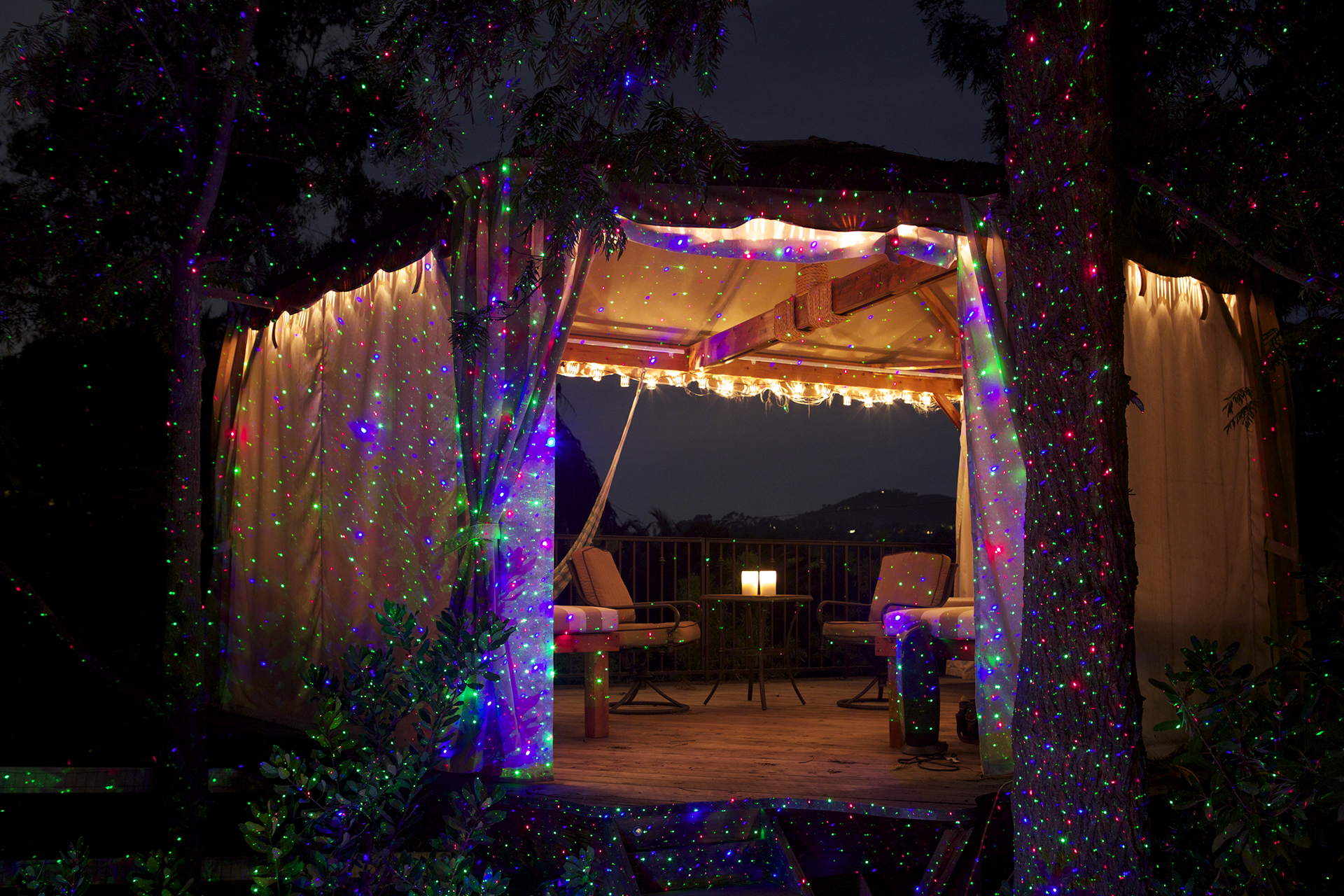 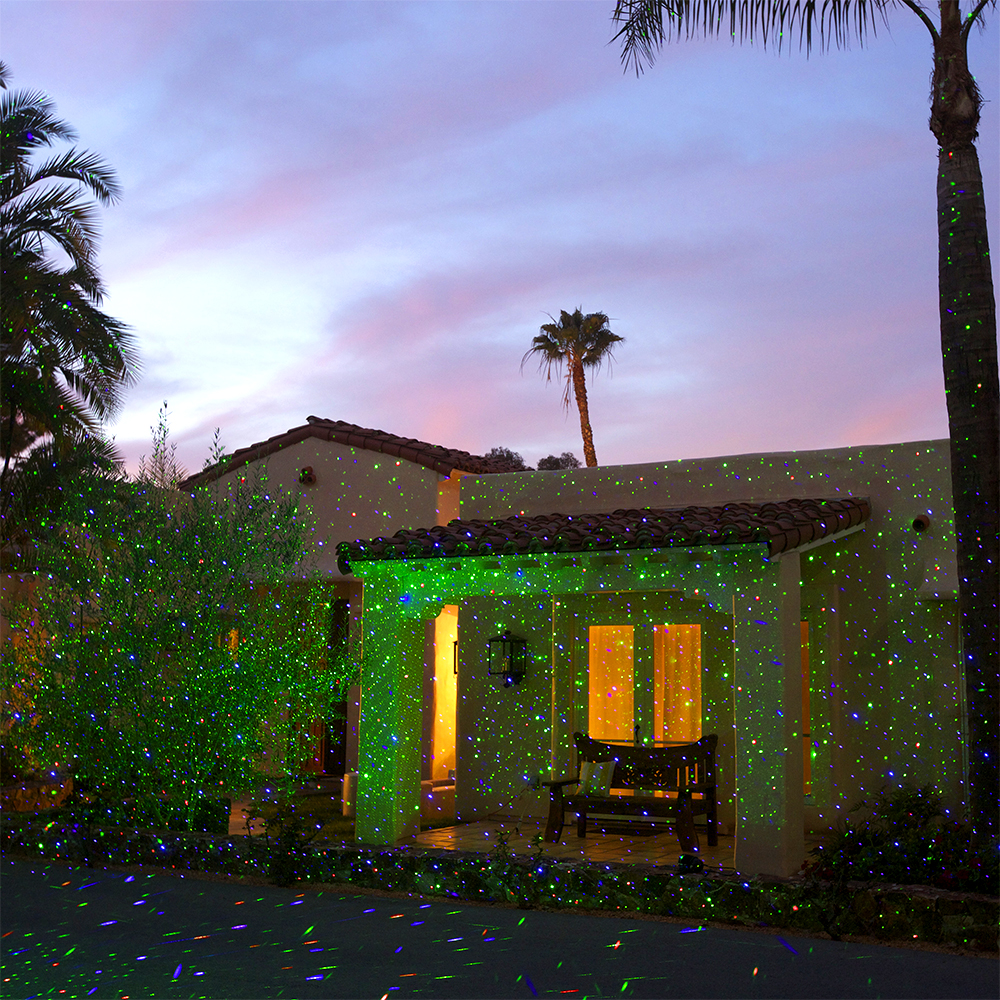 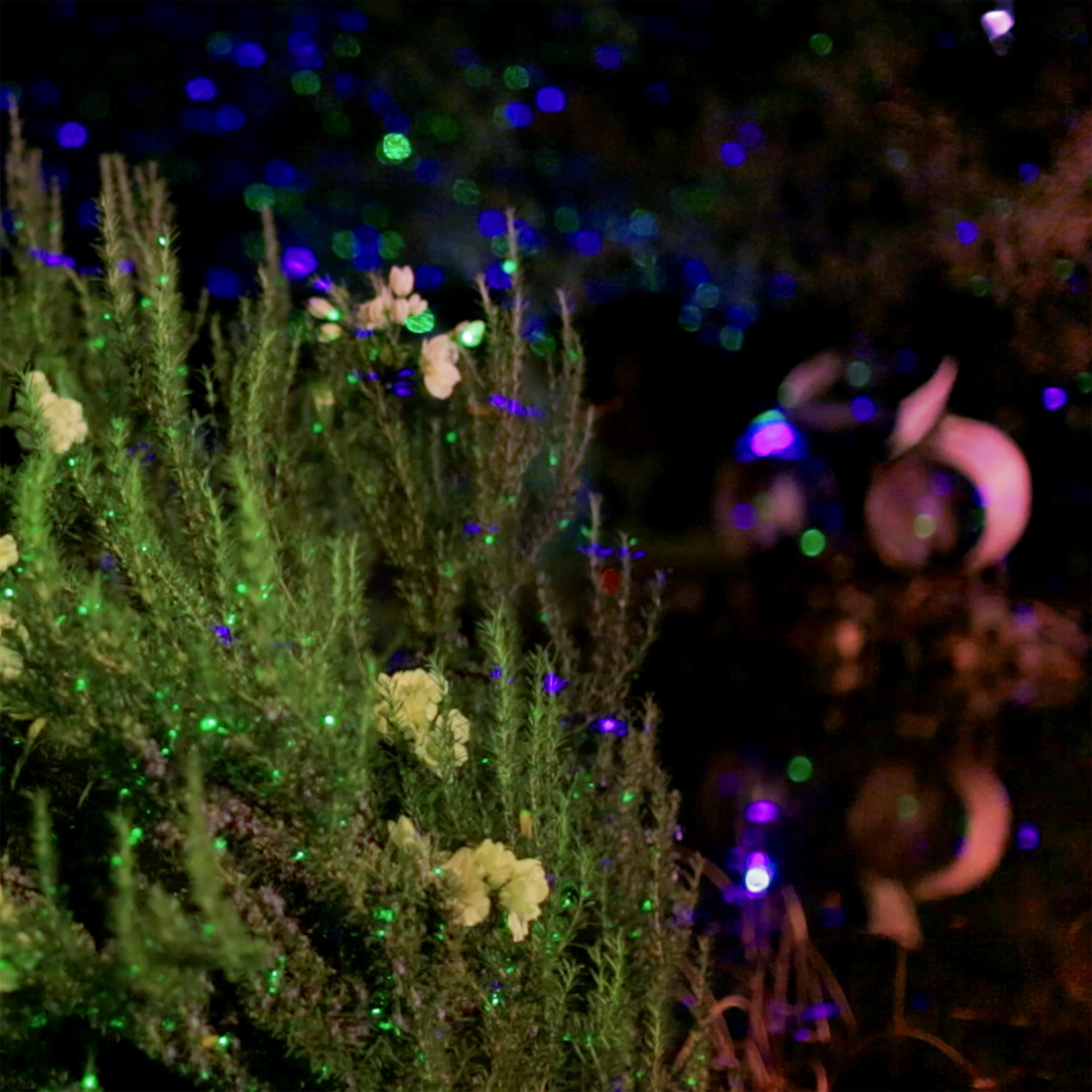 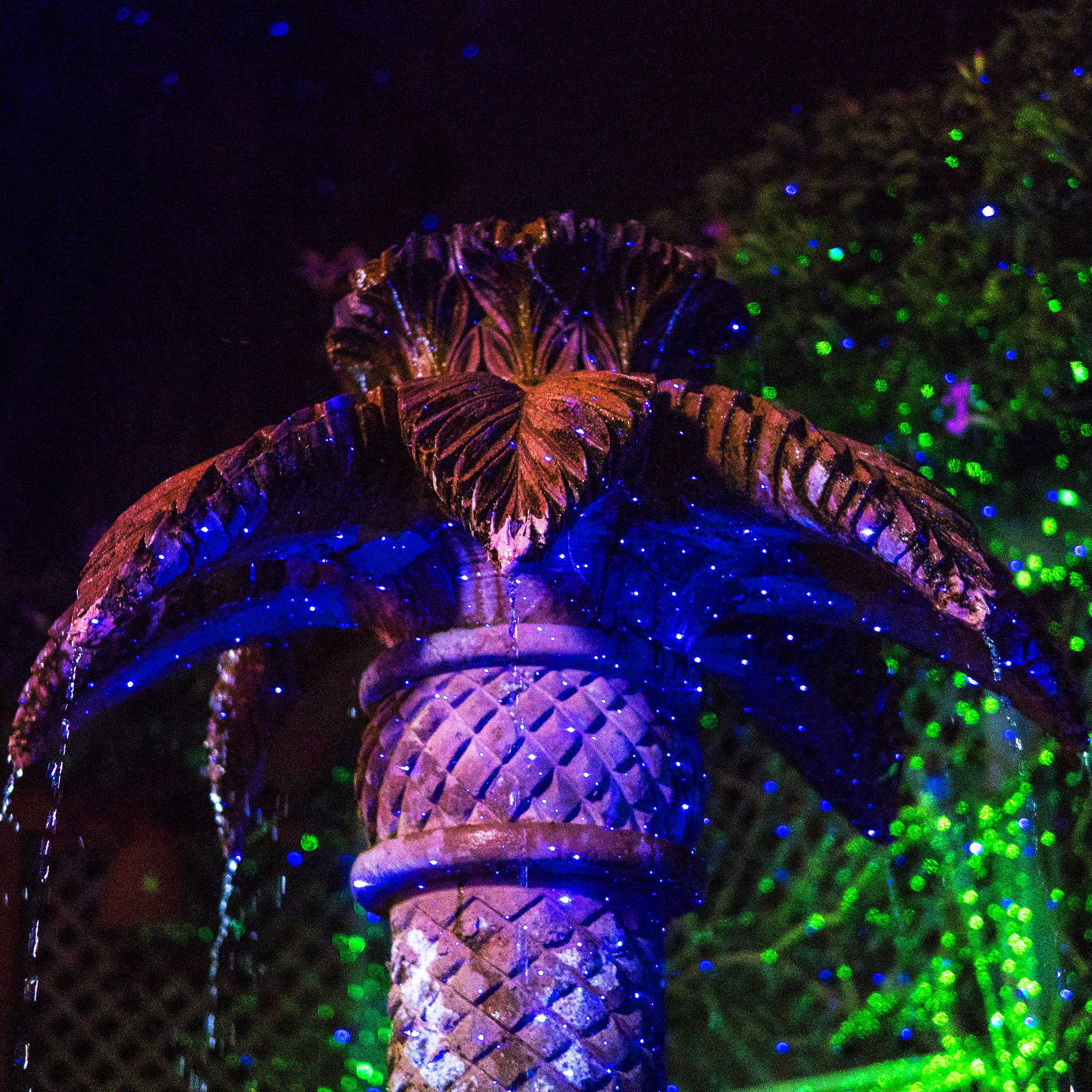 Our variety of laser and LED lights are enchanting and energy efficient! BlissLights are suitable for any type of home and any kind of lifestyle!

All of our collections serve an elaborate experience with little to no setup! The magic happens in 10 seconds or less. Just plug in and enjoy.

BlissLights is American owned and operated, but we also sell our lights in 8 different countries and counting!

We’ve partnered with some of your favorite retailers like Amazon, Target, Walmart and more to make sure you have options when shopping.

See what our community is saying.

The TRIO light is sweet! I've had no problems using the refurb'd version and I'm really happy with the price and with the light itself. No one has anything like it with it's RGB patterns!

I've been wanting a light for like this for some time to use at my RV campsites & Christmas but usually found cheap plastic LED type ones that just don't last..then I found the Blisslights...WOW this Trio light is made like a tank & is top notch high quality & is priced very reasonably & works like a charm..this light is no toy it's a powerful professional quality Laser Light..can wait til spring to use it at my campsites & reflect into the trees. Thanks Bliss!!

I've had my Bliss light for 5 years. Christmas Eve I turned the corner onto my street and halfway down the blocks I saw the brightest red and green lights I'd ever seen. It seemed to be close to a million! Someone had placed these perfectly sharp light on every tip of every branch of the gigantic 40 ft Pine tree in my yard!

How do BlissLights work?
BlissLights are laser lights that project thousands of colorful stars. Laser light is unique because it's coherent (concentrated light waves traveling in the same direction). Laser light travels in a beam and shines over long distances without losing brightness. We split (diffract) that beam into thousands of smaller beams to create the unique "starry" BlissLights effect.
Are BlissLights safe?
Yes, BlissLights are safe to use around people and pets. The lasers we use are low-wattage, and as mentioned above, we split the main beam into thousands of smaller beams which are less than 5 miliWatts each. We are also registered with the CDRH (Center for Devices and Radiological Health) and take great precautions to ensure user safety.
What is our most popular product?
Currently, our most popular product is the Sky Lite, which can be viewed here. It projects a galaxy of moving stars and a blue nebula!
How much area does a single BlissLight cover?
BlissLights coverage varies depending on how close the light is to the projection surface. The closer the light is, the denser/smaller the star cluster will appear. As you increase the distance between the projector and the surface, the effect will expand. In general, BlissLights cover roughly 30 x 30 feet from 10 feet away.

Are BlissLights safe to point to the sky?
While BlissLights are safe for everyday use, they are still lasers and will keep on projecting in any direction you aim the product at. Please note that any BlissLights product, if being used outside, should not be projected any higher than 45 degrees so the laser does not interfere with air traffic.
Are BlissLights available in white?
White lasers don't exist at this time, though we are researching the possibility. For now, we carry blue, green and red laser colors. Most likely, you'll hear exclamations of "Wow!" or "How did you do that?" ...not "Why isn't it white?"
Why don't you just use white LEDs?
Because LEDs emit incoherent light (instead of coherent light like lasers), they don't have the intensity and focus required to create a crisp star field. LEDs create an unfocused, blobby effect instead that's hard to see from more than a few feet away.
Why are some laser colors not as bright looking as others?
Each color has different wavelength intensity in the visible light spectrum. The human eye sees colors near the center of the spectrum (orange/yellow/green) as the brightest. That's why green or blue laser colors appear brighter than red, which is closer to the edge of the spectrum.
What are Refurbished products?
Refurbished items have been opened and touched and/or returned. They have undergone extensive quality assurance and are certified by our technicians to be in great condition.
What is the difference between ABS and metal products?
Our metal products, such as the TRIO and retired Spright Compact, are built with a metal housing that is heavy and built to withstand harsh elements. Our ABS binary resin products, such as the MINI, and COLOR have housings made of industrial grade plastic that is formulated to be lighter and less expensive while still maintaining rugged durability.
What does the warranty cover?
Effective August 1st, 2016, all BlissLights products purchased from any person or entity other than BlissLights or an Authorized BlissLights distributor or retailer will no longer be covered by warranty.

BlissLights will ONLY warrant BlissLights products and accessories purchased directly from BlissLights or an authorized dealer.

For more information, you can read our full warranty policy here.
What is your return policy?
If you purchased BlissLights on our website and are not satisfied for any reason with your light, or it was damaged upon receipt, we have a 30 day money back guarantee. In other words, any time during the 30 days after the date the product left our facility and shipped to you, you can ship it back to us for a full refund. The product must be in the same condition as it was when you received it and shipped back to us in its original shipping material. Please call us regarding returns after the standard 30 day money back guarantee.

PLEASE NOTE: We can not issue ANY refunds for purchases made through other channels. We can only issue refunds to purchases made directly through blisslights.com

Our patented design is the first of its kind and remains the highest quality galaxy light on the market. All products are also covered by our 1-year BlissLights warranty! Never miss a moment of bliss! Get 10% OFF your first order.